Showing posts from March, 2008
Show All

Bible Geek - Is it illogical to believe in the Resurrection?

March 20, 2008
Here's an Easter posting from Mark Hart (Bible Geek) that talks about belief in the Resurrection. In terms of arguments to use in its defence, of those he lists, I often use No. 6 when talking to pupils.

Situation Explained
Is it illogical to believe in the Resurrection?

Solution Offered
St. Paul had to deal with a lot of "high minded", philosophical types in …
Post a Comment
Read more

March 11, 2008
I put this slideshow together for our Reconciliation services in school during this final week of Lent. It was very much a last minute idea to use this song, but in the end the lyrics were just so apprpriate. 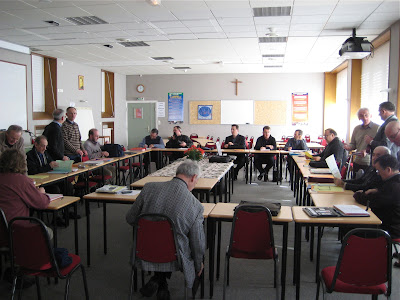 About 6 weeks ago I found myself on the list of the 24 delegate Brothers elected to represent the 300+ in the Province (France, Enlgand + Italy) at our next Provincial Chapter in October. We were called to a weekend of preliminary meeting at our Mother House in Ploërmel to set the agenda for the pre-Chapter consultations/discussions that will be taking place in each community over the intervening months.
It was good to see so many Brothers that I know well amongst the other delegates. Spending 5 years in France during my studies has helped me to get to know a large number of French Brothers, many of whom have become firm friends of mine. So as well as the serious side of the meetings, we also take the time to socialise and have a bit of fun in the evenings.
Here are some photos from the weekend.

Large Hadron Collider May Help Us Glimpse Into another Dimension 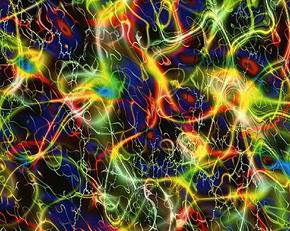 This article which I found over on Universe Today is just truly fascinating. String theory has always been a bit too much of a mind job for me, but I can just about get my head round this explanation of multiple dimensions in the universe and the fact they may now actually be able to prove their existence.

Large Hadron Collider May Help Us Glimpse Into Another Dimension


High energy collisions by the nearly-completed Large Hadron Collider (LHC) may be able to generate particles that are sensitive to dimensions beyond our four dimensional space-time. These exotic particles, called Kaluza-Klein gravitons, would be highly sensitive to the geometry of extra-dimensions, giving scientists an idea about what lies beyond our universe. If these particles are detected, and if their characteristics can be measured, then perhaps the extra dimensions predicted by string theory may be proven to exist…How can you measure the size of a room without actually measuring it? Forget…
1 comment
Read more

Here are some film reviews of things I've seen recently:

Daring film-making. What can one say about Day-Lewis that hasn't already been said? In the case of Gangs Of New York, he pretty much held the film together. Here, he is part of a film that is already of the highest calibre in terms of direction, cinematography, writing... A landmark performance in what will go down as a landmark in 21st century cinema. And let us not forget the excellent support from Paul Dano who manages to more than hold his own. A classic. 5/5

Breathtakingly audacious film-making from a true modern auteur. With this labour of love, Aronofsky has crafted a film that will infuriate some and baffle many, but if you let yourself be lead by the film's central conceit of Izzy's book being a unifying element between past, present and future, then an inner logic to the film will gradually reveal itself. Ultimately, it is a film th…
Post a Comment
Read more
More posts