How science is showing us the beauty of creation

For many years now I have used the internet to collect images from the Hubble space telescope and other space observation devices (as well as from an ever growing number of amateur space photographers who are producing results of a quality NASA could have only dreamed of 15 years ago). I have used such images in R.E. lessons when discussing creation, the origins of the universe, etc... with pupils.

I have no problems accepting the current wisdom in the scientific community on the universe's age (reckoned to be 13.7 billion years), though such wisdom is being continuously refined. I suppose, therefore, that I am not much of a Creationist, and this would be true. Actually, accepting such an age for the universe and therefore the length, scale and detail of the cosmic evolutionary process that must have taken place to arrive at where we are now, is for me simply further evidence (I would not be so arrogant as to say proof) to sustain the argument that a Creator is ultimately behind it all. For me, Genesis 1-3 has always been much more about our place as humans in creation (Gn 1:31 "and it was VERY good") than about an attempt to explain the creationary process.

Back to the images...

Lately, I have been knocked for six by the beauty of the images coming from the Spitzer Space Telescope, combining infrared light with light from the visible spectrum. Here are 2 of my favourites, both being of an area of space know as the North American nebula because of the shape of part of it (in visible light): the predominantly green one showing infrared light, the other being a mixture of visible + infrared light. Simply breathtaking! 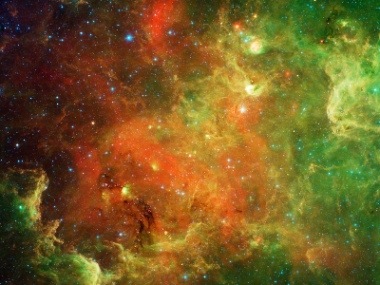 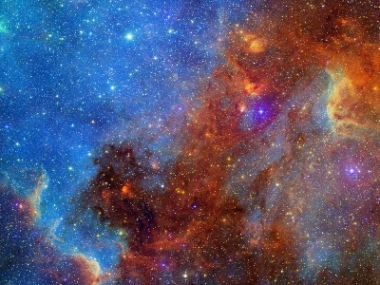 Here is the original NASA article from which I took them.

Such images make my heart and soul rejoice, just as the vision of the stars in the heavens seem to have done to the writer of the book of Daniel.

And when you think that these photos are snapshots of parts of the universe as they were millions, even billions of years ago (the light from them taking that long just to get here), it makes the mind boggle. I think this is about as close to time travel as I will get in my lifetime!