Here's the start of my World Youth Day 2005 journal. The rest will follow soon.

This was my first trip to a World Youth Day and what an experience it proved to be. I took a group of 7 young people aged between 15 and 24. We were to make our own way to Bamberg in Bavaria where we would join up with a group of 70 or so French young people from Brittany, led by Brothers from my order.

Day 1 - Thurs. Aug. 11th: Liverpool - Blackpool - Stansted - Frankfurt - Bamberg - Burgebrach!
Our budget-priced journey to Bamberg took in a mini-bus, 2 Ryanair planes, one of which we had to run for, a shuttle bus from Frankfurt’s second airport (nowhere near Frankfurt as it turned out - 90 mins. drive away) to Frankfurt railway station, a run along the platform (Burger King meal in hand) to catch a train that through the famed German hyper-efficiency (this was as good as it got) tried to close its door on my leg whilst I held it open for the others who were arriving behind me (and this after a controller had calmly showed us where our wagon was far down the platform without warning us that the train would pull away before we even got there). Finally, a car + people carrier journey of 15 kms. with Pierre-Jean (one of the French group leaders and close collaborator with our French Brothers) and a German volunteer took us to the village of our host families. As you can probably guess, this day of travelling contained more than its fair share of adventures. At least we didn’t have to make a 20-hour coach journey like my French confrères and their group. Spirits in our group were excellent (as was the sense of humour) and maintained remarkably high, whatever the slings and arrows of outrageous fortune that were thrown at us. “Team Win.... Always Wins!” quickly became our rallying cry. 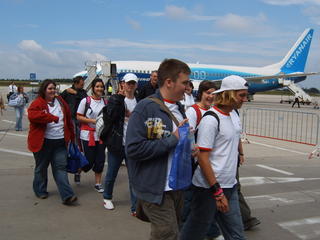 Frankfurt airport
Our host families met us by Burgebrach parish church. We went our separate ways to be reunited that night around a camp fire with about half of the French group and all our host families. Amazing how a couple of guitars, a few songs, a few beers and burgers, liberally sprinkled with lots of goodwill and human warmth can break the ice and create a special evening shared between people of different cultures and backgrounds. This could in many ways sum up much of what World Youth Day is indeed about.

Day 2 - Fri. Aug. 12th: Day of Social Action, evening in Erbrach inc. concert
Our hosts took us back to Burgebrach parish hall where we met our German hosts and French counterparts, ready to take part in the national Day of Social Action with all the other WYD around Germany and their hosts. Our task was two-fold: to go and do some environmental work along a river bank, creating a protected area to stop tractors endangering the nesting area of a family of beavers. Secondly, to decorate two concrete pillars with designs made up of bits of smashed wall tiles as a memorial to our passage in Burgebrach. For those working by the river, much fun was had at the expense of a German lady and Sarah Squires, both of whom made a bit of a pig’s ear of jumping across a narrow (!) stream that blocked our route to the beavers’ hideout, captured for posterity on video!! 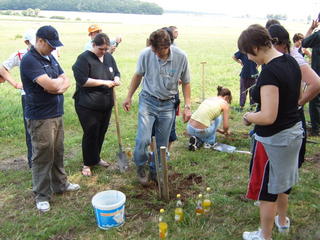 German local showing us how to "squidge" 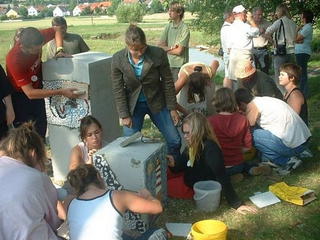 That evening we travelled to a neighbouring village, Erbrach, for the visit of a rather special church, a former Cistercian abbey chapel, and a disco. Music was provided by a local youth choir (whose director did some serious flirting with Sophie :-) and a young 3-piece rock band (The Brothers) with whom Emma and Sarah became enamoured, with signed photos to prove it. For Luke, the fun and games didn’t stop when he went back to his and Matthew’s hosts... a 4.30am paper round awaited him! 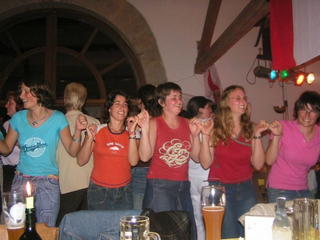 The French having fun in Ebrach
Day 3 - Sat. Aug. 13th: Bamberg - festival activities + concert A fun-packed day comprising guided tour of Bamberg (a lovely old town, untouched by wartime bombing), festival fun in the Town Square (music, dance, prayer...) with all those pilgrims staying in Bamberg diocese (about 5,000) and various festivals activities (“animations”) around the town in churches, halls, etc... and the open air. 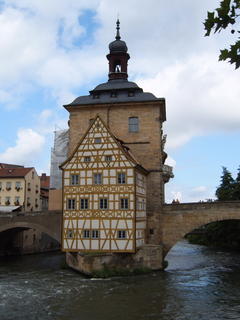 Bridge in the centre of Bamberg 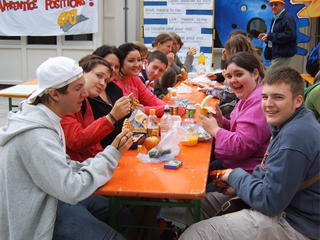 Picnic lunch with our French friends

Us Brits spent most time at a German scout jamboree with parachute games, Salvation Army Band, real life-size table football (complete with sliding poles the players were attached to), abseiling (of sorts) and full-size football complete with comic cuts video commentary from the touch line courtesy of Soph, Sarah and Emma and lots of Germans carrying trestle tables! Adele excelled herself in the latter activity (football, not the trestle tables), scoring a glorious goal and showing some of the boys how to tackle, yet doing it all with inimitable feminine grace. 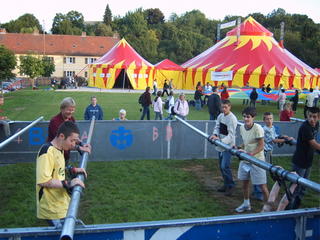 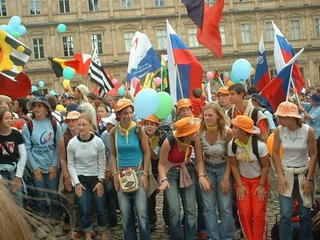 Music and dance in Bamberg town square. The orange hats were our way of finding each other in the crowds. Especially useful during the final few days in Cologne.

Day 4 - Sun. Aug. 14th: Mass in Burgebrach parish, reception at the Town Hall, afternoon with host families, evening at the annual Firemen’s party
I think we were all a bit pooped by this point! The time with host families gave some of the group the opportunity to do some video diary slots. The evening party (our last gathering with our German hosts) gave Emma and her new “friend” Jonas the chance to spend some quality time together(!) as well as the chance for all of us to sample the local beer, have a sing-songwith the Germans and French and exchange stories about the idiosyncrasies of our host families. They were all very friendly and warm, just occasionally a little eccentric - cutting locks of hair as keepsakes, for example, and using terms such as “boombastic” instead of “fantastic”. By this point in the trip there had been some serious efforts on the part of Sarah and Emma to speak da local lingo, especially about the weather (“Wie ist das wetter? Es ragnet!”The weather...? It’s raining!... as if you actually needed anyone to tell you this when it happens - I’ve probably got the German wrong, though).
Email Post