Showing posts from January, 2007
Show All

Only the Suffering God Can Help - By Jürgen Moltmann 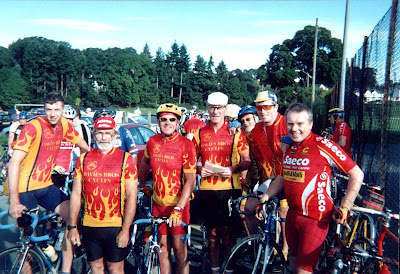 I found the following article by the great German theologian Jürgen Moltmann amongst my saved articles today and feel it is rather appropriate in the context of the death of a good friend and fellow cyclist, Mel Vasey, during one of our club runs (Birkenhead North End Cycling Club) last Sunday (see article in The Independent 20/01/07 ). Mel is on the far right in this photo taken before the Wild Wales Challenge at Bala, N. Wales in 2001.

This originally appeared in The Cry: The Advocacy Journal of Word Made Flesh vol. 7, no. 4 (Winter 2001)

This was the saving experience of my life. It was 1944, at the end of World War II. As a boy of 18 years, I was drafted into the German army. In February 1945, I was taken prisoner of war and spent more than three years behind barbed wire in Belgium, Scotland and England. April 1948, I was repatriated.

At the beginning of my imprisonment, I felt completely Godforsaken. I lost all hope; all interest in life faded away. The dark night of the soul came u…
Post a Comment
Read more

About my web page + MySpace

January 22, 2007
Just to say that my web page has some new-ish stuff on it about recent chaplaincy activities, links to Christian Rock articles, etc... (I'll have to start posting that stuff on here first). I also have a MySpace music page with some of my own songs on (sad, I know) which has actually proved a great way of keeping in contact with former pupils.... in other words, my self-indulgence has had a positive payoff for my apostolate.
Well, that's my story and I'm sticking to it!!

Notes for a talk on the 5th Beatitude “Blessed are the merciful, for they will be shown mercy”

Intro. - “Blessed are the merciful, for they will be shown mercy”.I’ve always found the Beatitudes rather daunting, being only too painfully aware of not living up to the ideals expressed in them. Then one day whilst preparing for this talk I suddenly had an image of Jesus walking around in the middle of a crowd of his follows, patting them on the back, putting his arm around the shoulders of some and saying these phrases as words of encouragement, initially aimed at individuals, but for all the crowd to hear. I imagine it being like a football team captain going around rallying his players/"troops" before the start of extra time in the Cup Final. For example, maybe a mother had just lost her son... Jesus goes up to her, puts his arm around her shoulder and says for all to hear, "Blessed are those who mourn, for they shall be comforted."

Jesus would have got to know t…
2 comments
Read more

The Road to Santiago: a Sponsored Cycle from Liverpool to Santiago de Compostella (N.W. Spain) 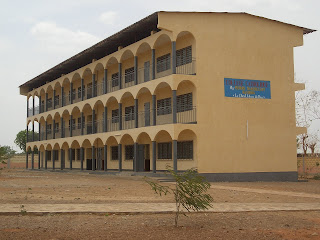 At last, here are some details about last summer's grand adventure....
In August 2006 I undertook my eighth multi-day sponsored cycle since 1992 with the intention of raising money for a new secondary school, Monsignor Hanrion College, run by my order (the De La Mennais Brothers) in Mango, Togo (W. Africa). This school just opened last year and is badly in need of resources. The Head Teacher there is a good friend of mine, Brother Romain Somoko. We studied together during our first year of training to be Brothers in 1990 and he was our order’s first Togolese Brother.

Pupils from Monsignor Hanrion College. Having had wonderful experiences hiking and cycling on parts of the Santiago de Compostela pilgrims’ route in France and Spain during my summer holidays going back to 1998 (solo or with a French Brother friend of mine), I decided to retread some of those paths but this time cycle solo from Liverpool to Portsmouth, down through Fr…
Post a Comment
Read more
More posts