October 17, 2019
I've recently been reading, reflecting and praying through an excellent series of daily devotionals put together by one of my favourite bands, Tenth Avenue North, primarily their singer, Mike Donehey, to accompany one of their albums from a few years ago, Cathedrals. You can find it on the YouVersion Bible app and website http:/en-GB/reading-plans/1266-tenth-avenue-north-cathedrals-the-overflow-devo.

Here's the devotional for Day 2 of the series.

STARS IN THE NIGHT

Maybe it's because I just finished Jack London's epic novel, "The Sea Wolf," but lately I've found my mind drifting to island images of shipwrecked castaways. I imagine a marauded group being rescued by a nameless vessel. Old ropes have been let out, and haggard survivors wearily hoist themselves up over the rails. Cold and exhausted, this group of worn down survivors sit on the deck of the swaying boat. Everyone's knees are up against their chests. A light rain has their teeth chattering and a stiff winter wind has their arms wrapped tightly around their tattered clothes and heaving chests.

No one is sure of what to say.
They've been rescued, but what's next?
Where are they going? Who's in charge?

Then an old sea-weathered captain strolls silently across the deck.
His whole face is a mess of white hair, his eyes, wild with kindness.
He takes a puff from his corn-cob pipe, and a gentle cloud of grey smoke emerges from a secret mouth hidden from sight under his billowing beard. He smiles wide and his pipe dangles from his lips as if held up by invisible wires.

Under his command, all heads tilt back in perfect unison, and a collective gasp breaks out as they behold the blanket of sparkling light just above their heads!
And oh, how the stars shine!
How the heavens dazzle their senses!
How their hearts are lifted by the glory unfolding above.
And so it is with us, isn't it?

I can't help but think of God's promises that way.
Against the black, against the crushing expanse of darkness above and the swirling depths of ocean beneath, His promises are stars.

To our shame, they cry, "There is therefore now no condemnation!"
To our anxiety they testify, "Nothing can separate us from the love of God!"

And just as those sailors of old sailed by the light of the constellations, so we too, can lift our gaze and set course through the wild waters of life. With our eyes fixed above, we can work together until we reach our final shore. We'll never make it off our islands staring at each other. As Antoine de Saint-Exupery surmised, "Love does not consist in gazing at each other, but in looking outward together in the same direction.” 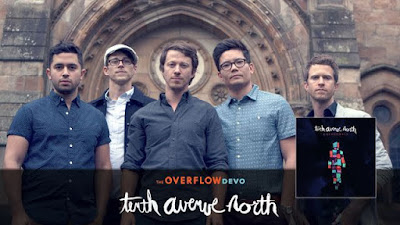 Here's the song, written by the band, which inspired this particular devotional.