July 09, 2007
Here's some news from our day in Paris. No problems with the flight to Paris (security, baggage, etc...) except Josh B. getting his backpack stuck in an automatic ticket barrier. A metro station employee had to come and free him causing much hilarity in the group.

We then headed to the Brothers' community in southern central Paris to drop our gear off before heading out for an afternoon of sight-seeing. 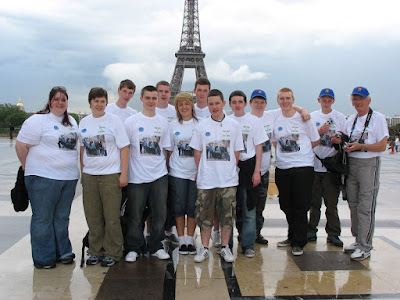 Places visited included Trocadero with its wonderful view of the Eiffel Tower, the Arc de Triomphe (which we climbed, all 284 steps - Michael Mc. counted them all) and Notre Dame Cathedral. After some free time to wander and get a few souvenirs, we headed for a well-known little side street with plenty of good value restaurants (my 4 years of study in Paris come in handy sometimes! :-).... and a Haagen Dazs ice-cream parlour! We had a very nice meal in a French restaurant (there were Greek and Italian ones also), though Paul H. was a little miffed that his chocolate mousse came in a seemingly smaller dish than ours. Megan L. then got a fit of the giggles which set us all off. Many minutes had passed before order was restored amongst the troops.

There's a great atmosphere in the group, no doubt in large part due to having had our training weekend together in Brittany. We are all tired but will be getting a much longer night's sleep tonight. Tomorrow's flight to Togo is at 1.10pm, but we've been asked to be at the airport for 10.00am (there are about 80 of us checking in all together including the French).

Everything Stops for Tea said…
Hello all,

Have a safe flight, enjoy yourselves, make sure Sophie behaves herself!!!

Mary said…
Hi
Great to hear all news. Please tell Sophie her CRB form has arrived.Hope the next flight goes without problems Mary
9:50 am

Anonymous said…
I'm going to enjoy reading your adventures. Thank you for doing the blog.
Please say "Hello" to Sophie for me.
Cheers
Jenny
10:05 am

Caroline said…
Hi Everyone
Hope your flight to Togo went ok and your first night in Africa was memorable for the right reasons!Just wanted to wish you all the very best, and hope you enjoy every minute. Simon, I really miss your hugs ! Have fun everyone and keep happy and healthy.
Love from Caroline
4:46 pm

Hope you are well. Iain wanted to know if you arrived safely. He is still island hopping. Paul will be at home next week.

We are all enjoying reading the blog