Showing posts from June, 2005
Show All 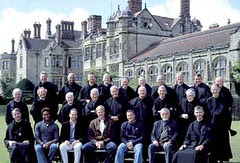 Worth Abbey community + the volunteers
Originally uploaded by bro_james."The Monastery": a highly successful BBC 2 3-part documentary following 5 contemporary men who volunteer to live 40 days at Worth Abbey. I know lots of people who've seen at least part of it, some of whom have a lukewarm attitude to organised religion at the best of times. They were all gobsmacked by it and many found it profoundly moving (as I did myself - especially the last part and Tony's religious experience). The reaction in the press has been amazing. One of the volunteers (Tony) has even been talking openly on TV chat shows about how he discovered faith in God during the experience. His story gives tremendous witness to what Christianity has to offer people in today's secularised societies, in part simply because of the type of person he was before doing the series and also through seeing how it has changed him. I know a lot of people are campaigning for the series to be realeased on d…
4 comments
Read more
More posts